Brett Dinkins is a consultant with Victory Enterprises who helps candidates, campaigns and causes in the Midwest achieve their goals.  He can help manage a client’s candidacy for local, state, or federal races as well as assist causes as they work to communicate their policy goals with voters.

As a student at Mizzou in 2008, Brett found himself immersed in politics for the first time, working on the McCain presidential campaign, making phone calls and knocking on doors. The first local campaign he managed was for a Republican in what is now Missouri’s 144th house district, trying to win a previously Democratic-held seat.  As the race eventually proved successful, Brett got the bug and has been throwing himself into government and campaign work ever since.

“I wasn’t looking for a consulting job, but after being a part of a handful of statewide races and dozens of legislative campaigns, the idea of working for VE and being part of an established organization was really appealing to me,” said Brett, reflecting on how he came to join the Victory Enterprises consulting team.  “It’s great to work for a full-service organization like VE that can provide literally anything a candidate needs in their race.” 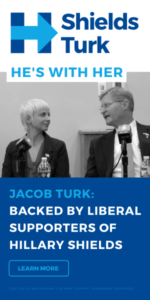 Since 2012, Brett had worked around the VE team and he says he appreciated their talent and professionalism.  When Mike Cierpiot ran in a special election for State Senate in 2017, Brett served as the campaign manager.  Through that race, Brett worked closely with the VE staff on an award-winning digital media campaign, He’s With Her, which attracted national attention and also helped Brett officially make the jump into full time consulting for VE.

“Over the last year, we helped take out over 40 years of incumbency in city and county elections alone,” says Brett.  “Every win is a great win, but there is an added layer of excitement to being able to work with underdog candidates who challenge the status quo and come out on top.”

But it hasn’t all been easy.  His toughest candidate to date?  His mom, State Representative Chris Dinkins.  “In that race, I wasn’t just the consultant.  I was also the candidate’s family.  There is definitely extra pressure knowing you’ll be at Thanksgiving dinner with the candidate after the voters have decided their fate.  It also gave me a greater sense of empathy for the stress candidates and their families feel during a campaign.  It made me a better consultant to see that side of things.  And thankfully, she won.”

Brett holds a BA in Communications with minors in political science and sociology and is one class shy of obtaining his Masters in Public and Nonprofit Management from the Harry S. Truman School of Public Affairs.  His combination of academic knowledge and real-world experience provide a unique skill set that benefits his clients.

Because of his vast personal experience, Brett has developed an appreciation for the role consultants play in a campaign.  “Treat them like your Doctor or Lawyer.  Always be honest, trust their expertise, but don’t be afraid to ask questions.”

“More and more, consultants are essential for helping candidates navigate increasingly tricky political climates,” says Brett.  “A consultant brings detailed organization, daily guidance, and a professional touch to all areas of the campaign that help set it apart.”