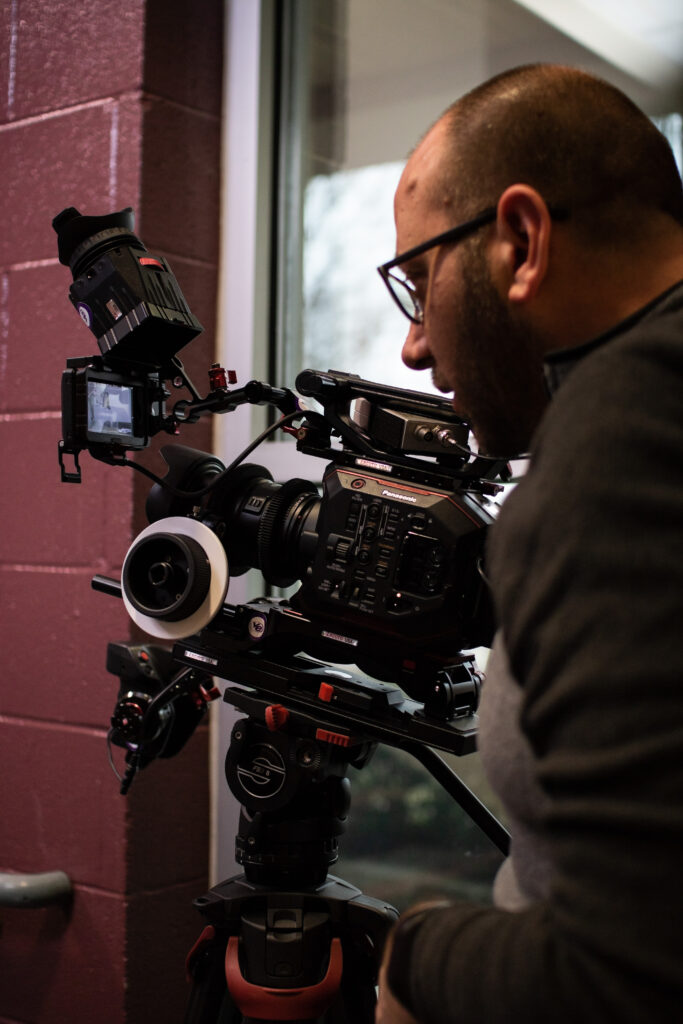 In 2018, Victory Enterprises proudly hired Ben Muehleisen to lead our production and media development department. His contributions have helped set Victory apart as a leader in TV, social media, and radio projects.

“I did sound production growing up,” says Ben of his early interest in media. “And went to school originally to be an audio engineer, but that required a deeper knowledge of music, which I don’t have. So I shifted my focus to Mass Communications.” While looking for an internship his senior year of college, he was offered the possibility of an internship editing video for the Blues. “Being a lifelong Blues fan, I jumped on the opportunity.”

While working as an editor for the Blues, Ben had the opportunity to meet people along the way invited him to work on a variety of projects, giving him the chance to learn the ins and outs of shooting film. For the next several years, continued to meet and work with new people, soaking up new experiences and gaining valuable skills. “It’s how the industry works. You meet new people and get connected to new opportunities. It helps grow your experience as a videographer.”

Eventually, he came to work at a political lobbying and fundraising company that wanted to incorporate video into their product line up. By 2010, they were working on campaigns with full crews and studio space. They became known as First Rule and it was through this company that his relationship with Victory began.

“I’m not really a political guy. I just followed production and this is where it brought me,” says Ben Muehleisen. “As media became a significantly more important part of politics, agencies like mine became crucial to helping a campaign reach its full potential. Victory was a client for a long time and we did a significant amount of their production. Then, about a year ago, they hired me to take over their in-house production.”

Thanks to his extensive background in media, Ben has a clear understanding of what it takes to make compelling media work for any kind of client. Whether its a corporate piece or a political fundraiser, his advice is the same. “Start with the end in mind and work backwards.”

“You have to understand who you’re trying to reach and what message you want to convey. Once we know that, we can go back and work on a detailed script.” But he urges clients to remember to be flexible. “Clients who are unbending can be difficult to work with. Not every dream you have on paper is possible in the real world. But I do my best to help bring their vision and story to life.”

Victory Enterprises has invested in our media department because we believe a strong production arm can make all the difference when building a winning campaign strategy. Our most recent camera acquisition has enabled us to provide a higher quality product at a lower cost. No client is prohibited from a nice product.

If you’re considering video and media production for your campaign or company, the most important thing to understand are your goals for the project. Determine your budget and have a conversation with us about the message you want to convey, whether it’s through social media videos, traditional TV, or radio. “We want to be responsible with your resources. If you tell us what you need, we will work hard to make every last cent work hard for you.”

“We learned a lot from this last cycle about how media is continuing to evolve,” says Ben Muehleisen. “One thing we want clients to keep in mind is that video is not a one-size fits all product. You need to shoot with your medium in mind. Shooting a facebook video is very different from shooting a TV commercial. They go at a different pace and require different framing.”

“For example, social media videos allow for viewer interaction. If you’re on instagram, you’ll want to walk a viewer through the proper commands, like swiping up on the screen to see more. When a client is prepared to do the extra things, they get a more polished result.”

To learn more about Victory’s production capabilities and the fearless leader who makes it all possible, you can contact Ben Muehleisen at ben@victoryenterprises.com and subscribe to our quarterly production newsletter.